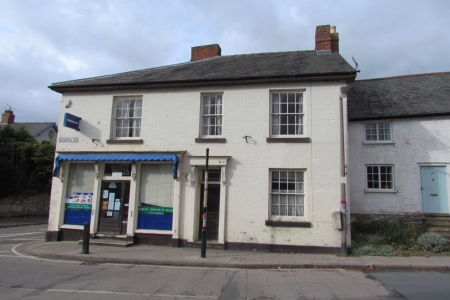 In 1861, Charles Harris is recorded as living in Welsh Street as a “Stone Mason & Innkeeper”, with his wife and four children.

He had the foresight to open a pub called the Railway Tavern Beerhouse before the railway opened between Bishop’s Castle and Craven Arms in 1865, however on 26th November 1864, as landlord, he was charged with an “offence against the Beerhouse Licence, keeping open his house after 10pm for sale of beer” and fined 12/6p.

In 1865 (18th October) Charles Harris (Railway Tavern) pledged 10 shillings subscription in a public meeting to consider the best way to celebrate the opening of the Railway (24th October). He also invoiced The Committee £1/4/6d for refreshments for decorators and a farmer, and again on 25th October for “dinner, ale for 30 men @ 2/6d = £3/18s”, (his maths was wrong on his side = £3/15s) supplied at the opening ceremony.

The 1871 census records he has moved back to Northampton, where his wife Lydia was born and is again a stonemason and the building reverted to a grocers shop (John Pugh 1871-91).

It became Burds Grocers shop from 1900 to this day.