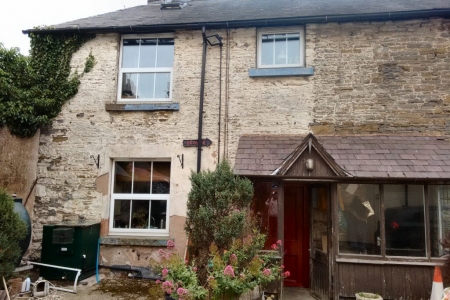 This was possibly so named because of its proximity to the kennels of the United Pack of foxhounds, or or perhaps it just acknowledges the role of hunting in local life.

In a lease document dated 1st August 1758 at Shropshire Archive, William Cross (joyner) is given a covenant by Sir Francis Charlton to build a new house within 2 years on the site at his own expense, having been a tenant there since 1717. He is also listed as taking on Richard Minton as an apprentice in 1757.

In a sales document of 9-10th May 1786 at Shropshire Archive, Lot III is “ The Fox alehouse (leased for the lives of Martha Cross 67 and Charles Cross junior 29), the buildings consist of a house used as an Ale-House and a cottage in two tenements. Rent 15 shillings + 2 fat hens or 1 shilling or a labourer in the harvest, or 1 shilling”. On 24-25th November 1786, an exchange of lease from Nicholas Lechmere Charlton to Trustees of the late Lord Clive shows “Conveyance by lease of property in Bishops Castle: the Fox alehouse with garden and close; a cottage in two dwellings, in lease to Martha Cross”.

In the census of 1841, Charles and Mary Cross in their eighties, were living in one Fox Cottage with Shoemaker Richard Collins 46 and next door in another Fox Cottage lived Richard & Mary Cross, 44 & 34, with children Mary, Richard & William, 5,4 & 2.

Mary and Charles died in 1843 & 44 and the Vicar annotated their records in the Register with “Old Fox” & “Old Fox Inn”.

In 1864, an early Methodist preacher, Thomas Evans recalled being “stoned on the horseblock at The Old Fox”. Some Bishop’s Castle residents were not ready to hear about abstinence, but reference to the ‘old’ Fox suggests closure was well before 1864.

In 1884 it was named as the home of Richard Lewis (Blacksmith) in a list of Inquest Jurors.

Known locally to have been a “Fighting Pub”, where disputes were settled in a pit in the garden, it is also reputed to have been used by school boys at the National School, just down the hill at the end of School Lane.

Research ongoing. Do you have any information or pictures of any of the pubs of Bishop’s Castle? We’d love to hear from you. Contact us here.